In general, we like to think we know how much something is worth. The decision is based less on logic and more on emotion, an intangible gut feeling. When it comes to video games we know when a game is under, or in most cases, over-priced. Unfortunately, that aptness in designating price to value is disrupted by inflation.

Inflation has recently become a serious problem the world over. No country is immune and there are real fears that higher interest rates, squeezed demand and cutbacks could spark stagflation or even worse – a global recession. Reports of stable goods going up in price is becoming a daily occurrence. At the time of writing UK inflation rates are at a four-decade high and are just south of breaking into double-digits. We are seeing the effects of inflation everywhere. Commodity and food prices are all up. Mcdonald's has increased its prices for the first time in 14 years. Amazon Prime will increase its price for the first time in 8 years. Even technology, which usually sees prices decline with time, is not immune. Meta announced it will increase the price of its two-year old Quest 2 VR headsets by $100 (although there are other reasons than inflation which are specific to Meta’s business on why it is doing this).

What of video games? Besides collectors of retro video games and consoles, when the price of older video game technology goes up, you know there is a problem. Could we see the $69.99 price tag for new PS5 and Xbox Series games go higher? So far this is not the case, but anything is possible. If energy costs and the cost of goods keep on rising, how long will publishers absorb rising production prices before they pass that on to you and me? Unfortunately, this article cannot answer those questions, but it did get me to think – how expensive are video games today? Let us for the moment drop that intangible gut feeling and go with some hard facts and figures. How expensive are new games today compared to yesteryear?

Thanks to  an article by Robert Grosso for TechRaptor, we can gauge how much new console games were priced over time. Below are my graphs based on that analysis.

Graph 1 – over time the price of new games increased with a cycle of approximately 5 to 7 years. The price increase seems to occur during significant upgrades in the console life cycle (such as when game technology moved into new graphical improvements or when optical drives were added). For example, between 1993 and 2001 the average cost for a new console game was $49.99, but in 2005 with the release of the Xbox 360 and PS3 that increased to $59.99. 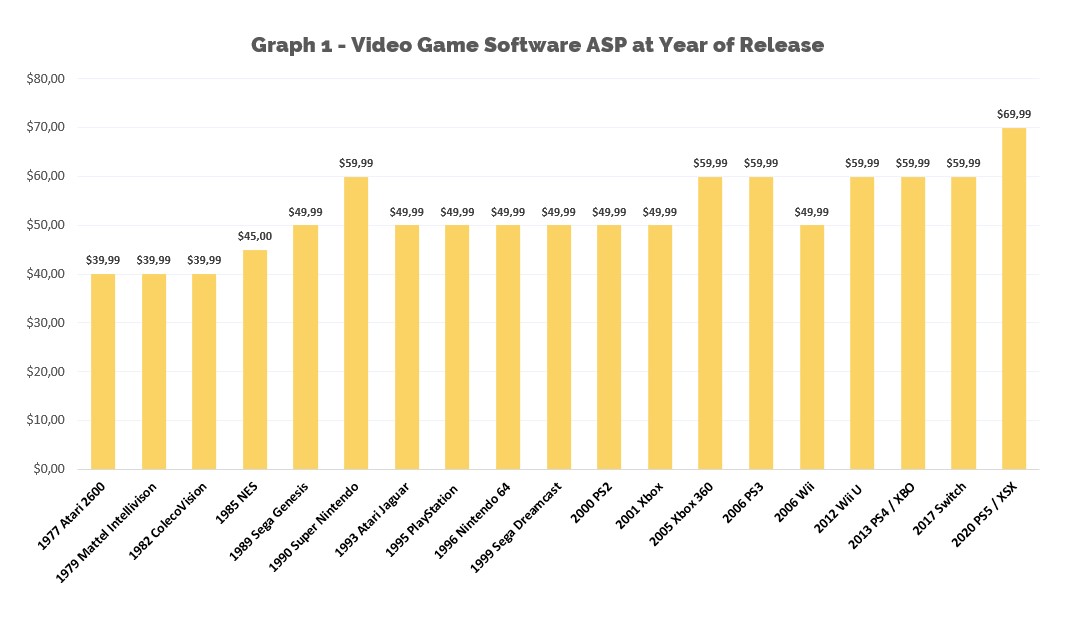 It is obvious that prices have increased over time. We should expect this given the prowess of modern consoles, the cost of making games and the rhythm of naturally incurring inflation. In Graph 2, here are those same release prices but adjusted for 2022 price equivalent, using a US inflation calculator. 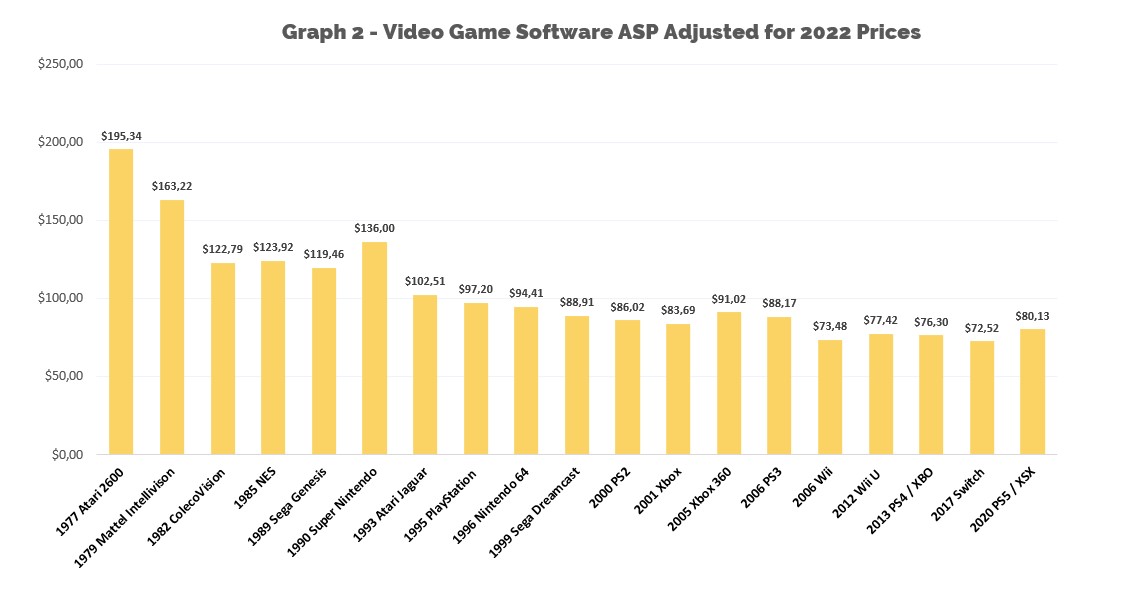 This means that a 1977 Atari 2600 game today would retail at the equivalent of just under $200. As time progresses the price of games fall in relative terms. Games for the Xbox One and PS4 that retailed for $59.99 back in 2013, today would be sold at $76.30 if game publishers followed inflationary pressures. Even the $69.99 games that released back in 2020 would today be priced at $80.13 (if game prices were kept at a constant pace with inflation). That is a 14% increase.

This means that although the average price of new video games increased in price in absolute terms, they got cheaper over the years in relative terms.

Between 1977 and 2020 the average relative price of games declined by almost -2% every year.

In Graph 3, these two prices, the absolute and the relative, are shown side by side. 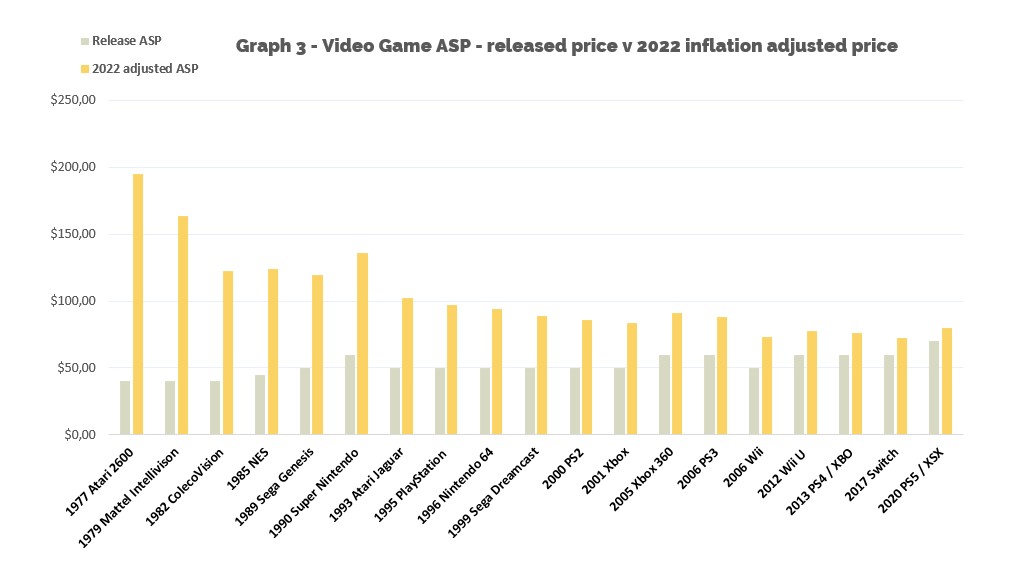 If all things being equal, if new games were price adjusted for 2022, new games for the 1977 Atari 2600 would be four times more expensive today, new games for the 1993 Atari Jaguar would be twice as expensive today and new games for the Xbox 360 and PS3 would be 50% more expensive if they released today. The relative price curve begins to shallow around the 1990s and gets ever closer with absolute prices by the time we reach the 2020 consoles, the Xbox Series and PS5. This implies that technological improvements in making games, economies of scale, efficiencies and cheaper production values were most felt four decades ago. The good news is that the trend has been downwards.

Outside of commodities and energy supplies, incremental price increases in everyday products (and services sold) keep their price for years at a time. This helps with forecasting costs of good manufacturing, consumer demand and investment planning. It is during times of high inflation that this feeling of certainty can be undermined. Full game customers generally know the price of a new game before purchasing it and publishers are reluctant to adopt higher prices for their Manufacturer's Suggested Retail Price (MSRP) because of this unspoken bond with their customers. Inflation pressures on the cost of manufacturing games are absorbed for years until such a time that the price of new games must increase to meet these economic realities.

The price for new Xbox Series and PS5 games (AAA games) today reside at $69.99. Let us assume this was based on the calculation that these prices meet best operating costs, make money for the publishers, and is the optimal price for demand expectation. Let us assume the $69.99 is the “most efficient” price for selling new games. As a fun exercise let us work backwards and see how much that would have been in the past.

Graph 4 illustrates what would a $69.99 game today have felt like back in the past.

Although this is a fun exercise it does reinforce the power of analysing prices in relative terms and not in absolutes. The problem is that people do not operate or think in “relative terms”, we think in “absolutes”. When prices go up, we assess the new price against the old and judge the level of additional cost to personal wealth. It is with this human behaviour in mind we find another beneficial trend. Absolute prices for all video games are also declining over time.

Graph 5 shows the absolute prices for physical full games between 2018 and 2021. The data is from Games Sales Data.

For the Switch, PS4 and Xbox One, all three consoles saw a decline in the price of games. There are many reasons for this, for example, a greater number of cheaper catalogue games are sold and as new PS5 and Xbox Series consoles came onto the market, the demand for new games for the older systems diminished. With these factors under consideration, it does not alter the fact the trend in average prices is going in one direction, down. This phenomenon was also seen in digital full game prices as well, as shown in Graph 6. 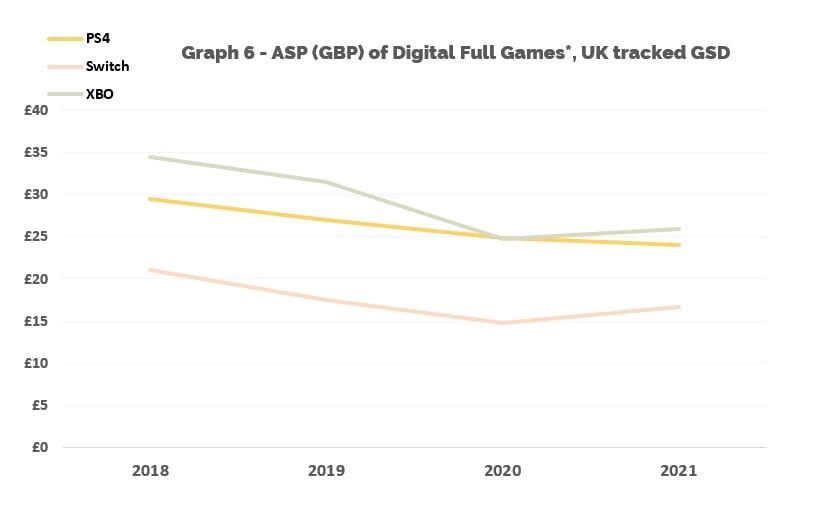 *First-party Nintendo games are not included.

To make matters even more favourable the average UK employment annual income increased with a CAGR of +1.9% (see Graph 7) between 2018 and 2021. By contrast, the combined physical and digital (first-party Nintendo games excluded) average price for the Switch, PS4 and Xbox One games declined with a negative CAGR of -6.4%. As people got richer, game prices, in comparison, should have felt cheaper. 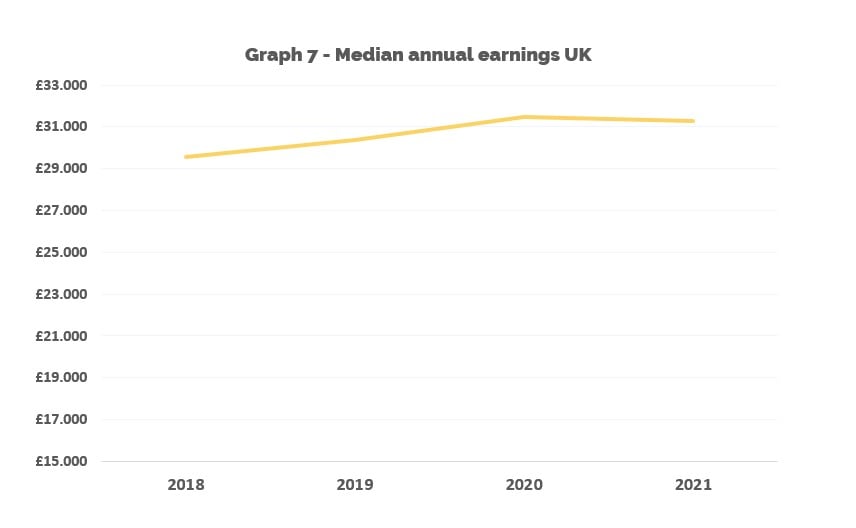 So, what does all this mean given what is happening with the high inflation today?

For many consumers, games still feel expensive, even if they are more affordable, because of the sense of “value” that they afford. Where once gamers paid $60, now they are asked to pay $70 for what is arguably the same game in either graphical or gameplay terms. It also does not help the fact that social media puts pressure on gamers to buy games on day one, video game publishers are posting record profits, many of the games come with additional DLC or microtransaction expenditures and free-to-play games can make paying for anything feel high.

It would be a brave publisher if they were to increase their MSRP above $69.99 for new games (for the Xbox Series or PS5) but that is not to say it will not happen, especially if inflation is persistently high a year on from now. It would be a safer bet for publishers to increase prices for games with the launch of a new console, as opposed to a mid-life cycle price increase, but given all what is happening today, nothing is a certainty anymore.

I will end the article on an optimistic note. Some economists are predicting the worst of the inflationary pressures is behind us, let us hope for all our sakes, they are right.