Sony’s PlayStation business strategy is changing. During the PS4 generation, Sony’s strategy was to double down on releasing quality first-party narrative games and offering its customers access to catalogue games with its PlayStation Now service. Although PS Now had PC access via a streaming solution and games controlled with a PS4 controller, the addition of a PC solution was not ideal. Apart from the fact keyboard and mouse was not supported, the quality of the streaming was sub-par even with a strong 30Mbs broadband download speed.

Today Sony is looking to complement, and some may fear, supplement, first-party narrative games with more “Live Services” games. In their latest presentation to investors Jim Ryan announced up to 10 new Live Service games will be in development by the Spring 2026, but it is with PC games that Sony have added some flesh to their financial modelling.

They say a picture paints a thousand words and nothing spells success than an upward trending sales graph. Below is a chart from Sony which shows PlayStation game revenue on PC during the last three years, 2022 is an estimation: 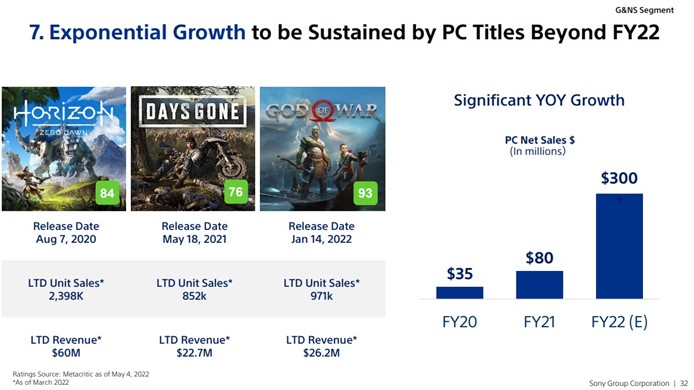 In the last three years, Sony will expect to make $415 million in PC game sales alone. That is almost half-a-billion dollars it otherwise would not have made if the company decided “for the benefit of the PlayStation brand” to keep their games exclusive to the PlayStation console. Keep in mind that near half-a-billion dollar revenue comes from games that are best categorized as “catalogue”. For example, in the chart above the three games listed released on the PS5 in February 2017 (“Horizon Zero Dawn”), April 2018 (“God of War”) and April 2019 (“Days Gone”). Recent news that Sony will release “Spider-Man” (a game from September 2018) and “Spider-Man Miles Morales” (November 2020) on PC is probably where it will expect to generate the bulk of that $300 million revenue.

1) The huge market on the PC has not yet migrated to the PlayStation ecosystem or have no intention to, but which is still very interested in playing Sony’s first-party games, and Sony understood that.

2) Sony is not afraid to break the assumption that exclusivity will make or break a console launch. Sony has so much confidence in its PlayStation brand that it feels it can expand its sales boundaries beyond its line of consoles. The company even went so far to sell their games on Steam, so it is even willing to share revenue with Valve and pay commission to get access to the biggest PC market.

3) Sony does not recognize Microsoft as a direct threat to its games business. Given the vast bulk of the PC games are running on a Windows O/S, Sony is fully aware that they are somewhat indirectly supporting their main rival. This is especially insouciance given Microsoft strategy to push GamePass on the PC as well. In the past Sony has dabbled in handheld technology with the PS Vita, so the company is not afraid to venture outside the constraints of its own console hardware.

4) The PC is the perfect platform to expand its revenue base as it comes with a prebuilt audience, all Sony must do is tap into it. Additionally, unlike supporting a console with hardware patches, the burden of gameplay functionality falls on the gamer and what system they have to play with. Finally given games are created on PCs anyway the conversion to PC should not come at a high cost.

The PC is the perfect platform to expand its revenue base as it comes with a prebuilt audience, all Sony must do is tap into it.

By selling its first-party games on the PC, Sony made a calculated risk that the PC would not cannibalise its console business, but instead, add an additional source of revenue. It is a difficult scale to balance. A lot of PlayStation gamers are openly questioning if day one PlayStation exclusive games will release on the PC, thereby effectively removing exclusivity and the need to buy a PlayStation console. Sony obviously does not want to weigh the scales too heavily on the PC side and annoy its core console business, but at the same time it will need to keep its PC business relevant if it expects this revenue to grow.

So far, their strategy has been sound. By releasing catalogue first-party games on PC, they look to find new and secondary markets without alienating day one buyers who would have bought the game on console and most likely finished the game when the PC release comes out. There is still an inherent risk because personally, this makes someone like me, who could be interested in buying a PS5, stop and think.

As a PC gamer by preference, I welcome the fact that many Sony first-party games can now be played on PC, but it has also put into perspective whether paying up to £500 for a console is worth it. If these games were not available on Steam and I wanted to play them, there simply would be no option but to buy a PS5. That barrier is now somewhat removed, given not all Sony’s games I want are available on PC.

The alternative now is to just to wait for these games to get released on the PC. For example, Sony has recently announced that apart from the two Spider-Man games “Uncharted: Legacy of Thieves Collection” and “Returnal” will be coming to Steam. At the Summer Games Fest, we got wind that The Last of Us Remake will also come out on PC. That is on top of the other PlayStation games which are readily available on the PC such as “Beyond Two Souls”, “Journey” and “Death Stranding”.

The only caveat as a PC gamer is that the decision of which first-party games will get a PC release (and when) is solely in the hands of Sony. “The Last of Us Part II”, “Demon Souls”, and “Ghost of Tsushima” may never get a PC release, so I could be waiting for nothing. In their investor presentation the company announced that they expect one third of their first-party titles to be readily available on PC by 2025. The six-million-dollar question is – which ones?

In a way that is the genius part of this PC roll out, Sony is keeping everyone guessing. For gamers who want to play Sony’s first-party games at launch, waiting for the supposed PC release is not a viable option in the current circumstances. Without a recurring up-to-date list of which PlayStation first-party games will be released on PC it is much better to just buy a PS5 and stop worrying.

We know that the availability of Sony’s games on the PC has not slowed down given hardware sales for the PS5 that has now surpassed 17 million units worldwide, making it one of the best PlayStation launches on record (even with a supply chain issue). This then leads to the conclusion that no matter how you break it down, PlayStation’s first-party games on PC becomes a non brainer. The company quite literally had nothing to lose.