A “correction” to spending growth in the video games market is not a surprise. The spike in demand due to the Covid-19 pandemic was expected to taper off. The release of the calendar Q2 2021 financials from AAA publishers has mostly proven the assumption that the correction has come, but some uncertainty remains. Increased monthly active users and greater spending on some live service games such as Call of Duty and FIFA has added variables to the model, but overall a downward trend is evident.

Below is a summary of the Q2 revenue between the two calendar years, 2020 and 2021. Nintendo and Sony’s numbers have been calculated to exclude hardware revenue and EA and Activision Blizzard numbers exclude mobile revenue. All Euros and Yen currencies have been exchanged to US Dollar using the same F/X calculated on 08/08/21: 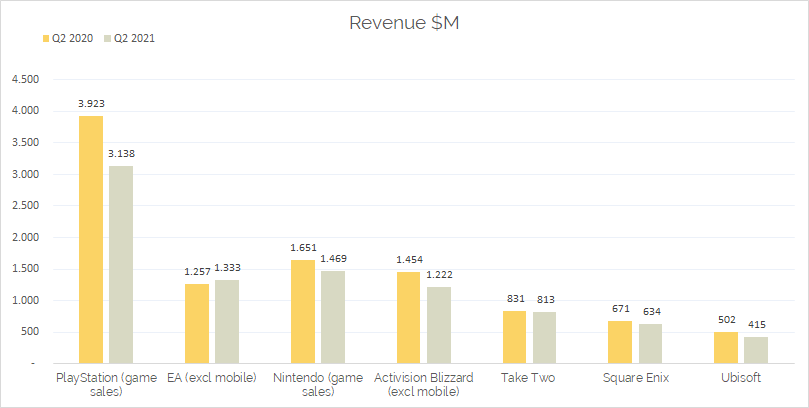 Except for EA, all publishers are showing a decline in Q2 year-on-year revenue. Here is the same picture as percentage of growth: 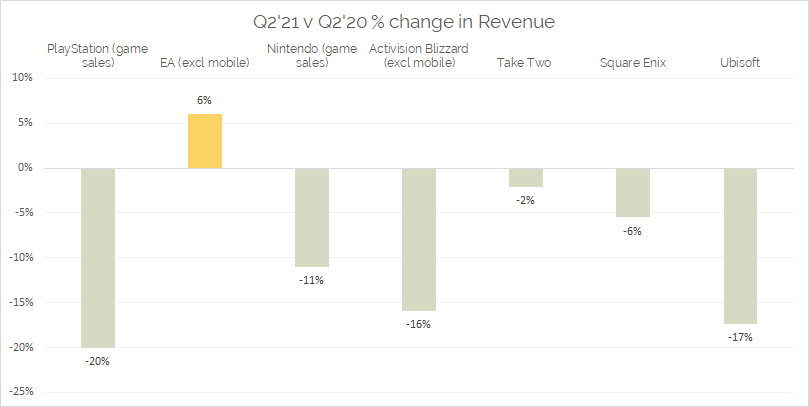 There was a degree of consistency among the publisher financials in that they referred to a smaller slate of game releases resulting in a decline in sales. The pandemic has obviously added constraints on the delivery of games with many titles being pushed back to later this year or into calendar year 2022. There is also the added factor that the PlayStation and Xbox consoles are between generations. Many gamers wanting to buy new games may be holding out until they get a PS5 or an Xbox Series (a wait made longer as stocks for the hardware are hard to attain). This could skew the market’s perceived demand resulting in low sales despite gamers wanting particular consoles.

EA bucked the trend of negative revenue spending, citing increased traffic to its FIFA and Apex Legends franchise. It is most likely that the Euro 2020 championship would have boosted the sale of FIFA FUT cards. The picture gets a little more complicated when digital sales are taken into account. Given the scale of spending on digital downloads, live service microtransactions, and DLC, any decline in digital spending will greatly impact overall sales. Note, Esport incomes are baked into the numbers below so it is not possible to identify specific digital game-related sales: 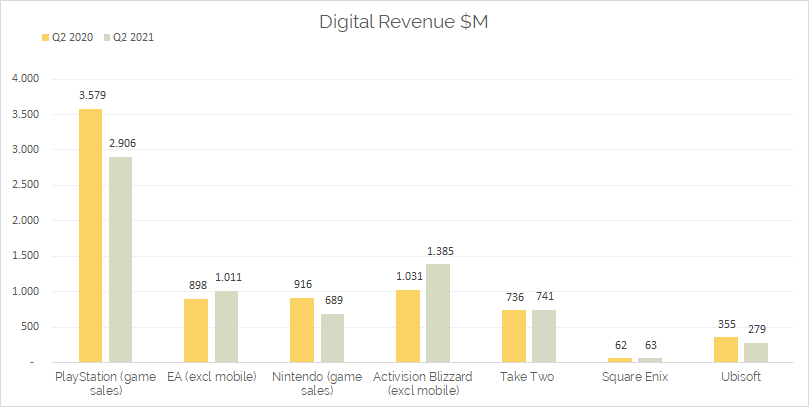 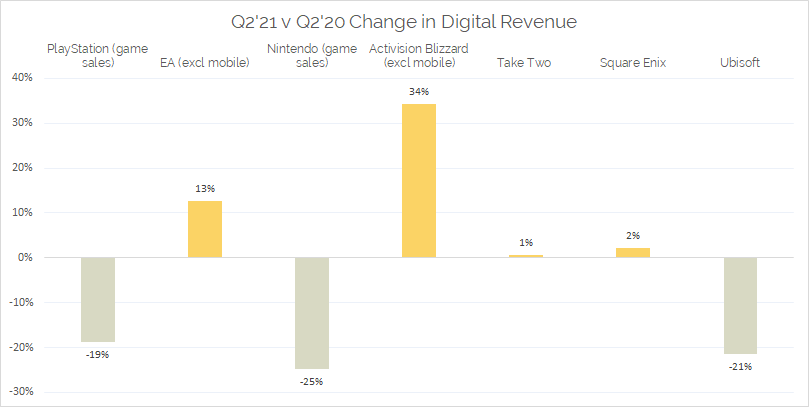 Activision Blizzard out-performed other publishers when it came to growth. This was due to the extraordinary performance by its Call of Duty franchise. Below is a screenshot from Activision’s financial statement and it shows the strong MAU that Activision has achieved with this franchise. This strong attachment seems to have translated into increased spending. 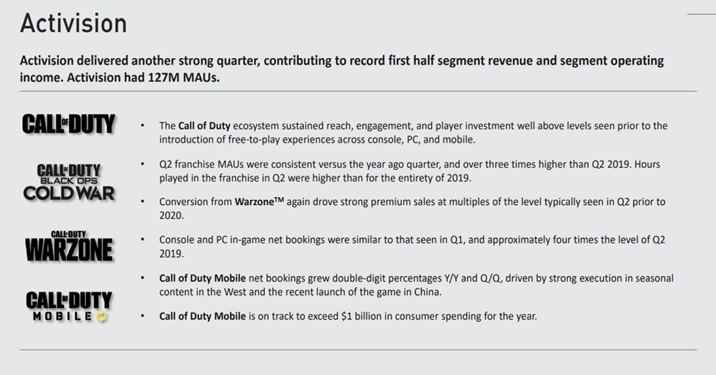 The data below is based on the six territories of tracked physical data (Benelux, Iberia, Nordics, UK&I, France, Italy). Note, the Sony and Nintendo numbers represent 1st party games only and not total platform sales which make up the numbers in their respective financial statements. 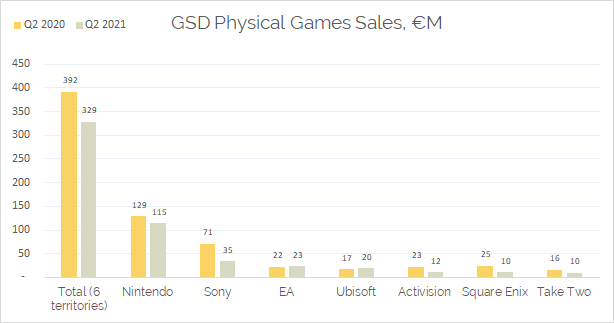 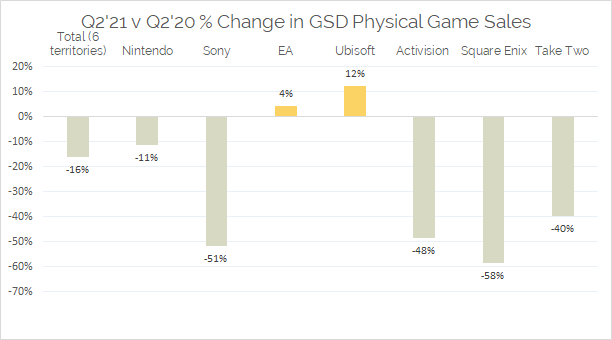 Ubisoft and EA were the only publishers to see an increase in physical sales. In Ubisoft’s case, this was due to continued strong sales for Assassin’s Creed Valhalla (released in October 2020), especially among the new consoles, which added an additional €15 million to its bottom line.

Here is similar data from GSD network (digital downloads) unit sales for full games from PC and console. Note, the data includes PC Steam sales only. The data is again restricted to the 6 territories. 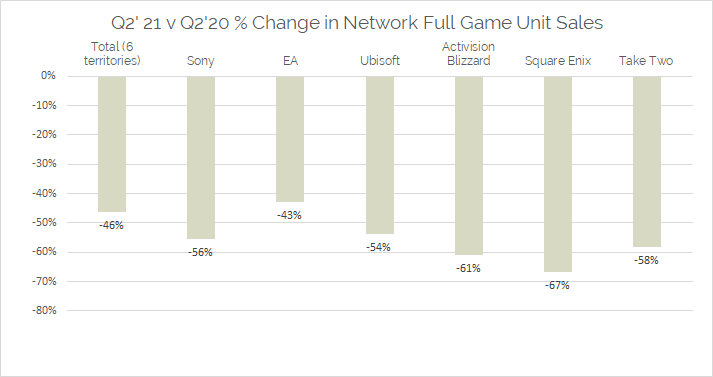 Reading this, the impression given is that the games market is in a downward spiral. The reality however, is that this is just a correction after the high from the Covid-19 induced spike in sales. So far, 2021 has seen fewer games released compared to previous years, particularly when it comes to AAA titles. For example, even when the pandemic hit last year and sales for catalogue games went through the roof, Animal Crossing: New Horizons, the Last of Us Part II and Final Fantasy 7 Remake all launched in the first half of 2020. They had a combined sell-through of 5.1 million GSD tracked units. The biggest titles of 2021 so far have been Super Mario 3D World + Bowser’s Fury and Resident Evil Village with a combined sell-through of 2.4 million GSD tracked units.

More positively, in accordance with the financial statements for Nintendo, Activision Blizzard, and EA, spending on R&D (which often translates to game development) increased by +2.4%, +15.1% and +17.6% respectively in the Q2’21 period compared to Q2’20. There have been reports that more studios are opening, more developers are being employed, and if E3 is to go by, more AAA titles are on the way. Realistically it should be accepted that the type of growth we saw in 2020 will not happen again, not unless another black swan event like the pandemic occurs which could fuel spending.