For Europe, the annual release of FIFA usually marks the beginning of the retail holiday for the video game industry. In 2018 FIFA 19 released on 28th September (week 39), in 2019 FIFA 20 released on 24th September (week 39) and in 2020 FIFA 21 released on 6th October (week 41). This year FIFA 22 was released on Friday 1st October (week 39). It is safe to assume that from week 39 the market for video games sales gets busy. It is a well-known fact that the two-month window of October and November drives the largest sales for video game software in the whole calendar year. This is due to the symbiotic relationship that big games release at the same time when gift buying for the Q4 holiday period starts. Let us briefly explore the impact week 39 to week 52 has had on retail and digital download sales. From here on, this period will be described as the “Q4” period.

The bar chart below illustrates how many full game unit sales occurred between week 39 to week 52 (week 53 for 2020). The data is for physical and network full game sales (digital downloads) among the six European GSD retail tracked territories which include Benelux, Italy, France, Nordics, Iberia and UK & Ireland. 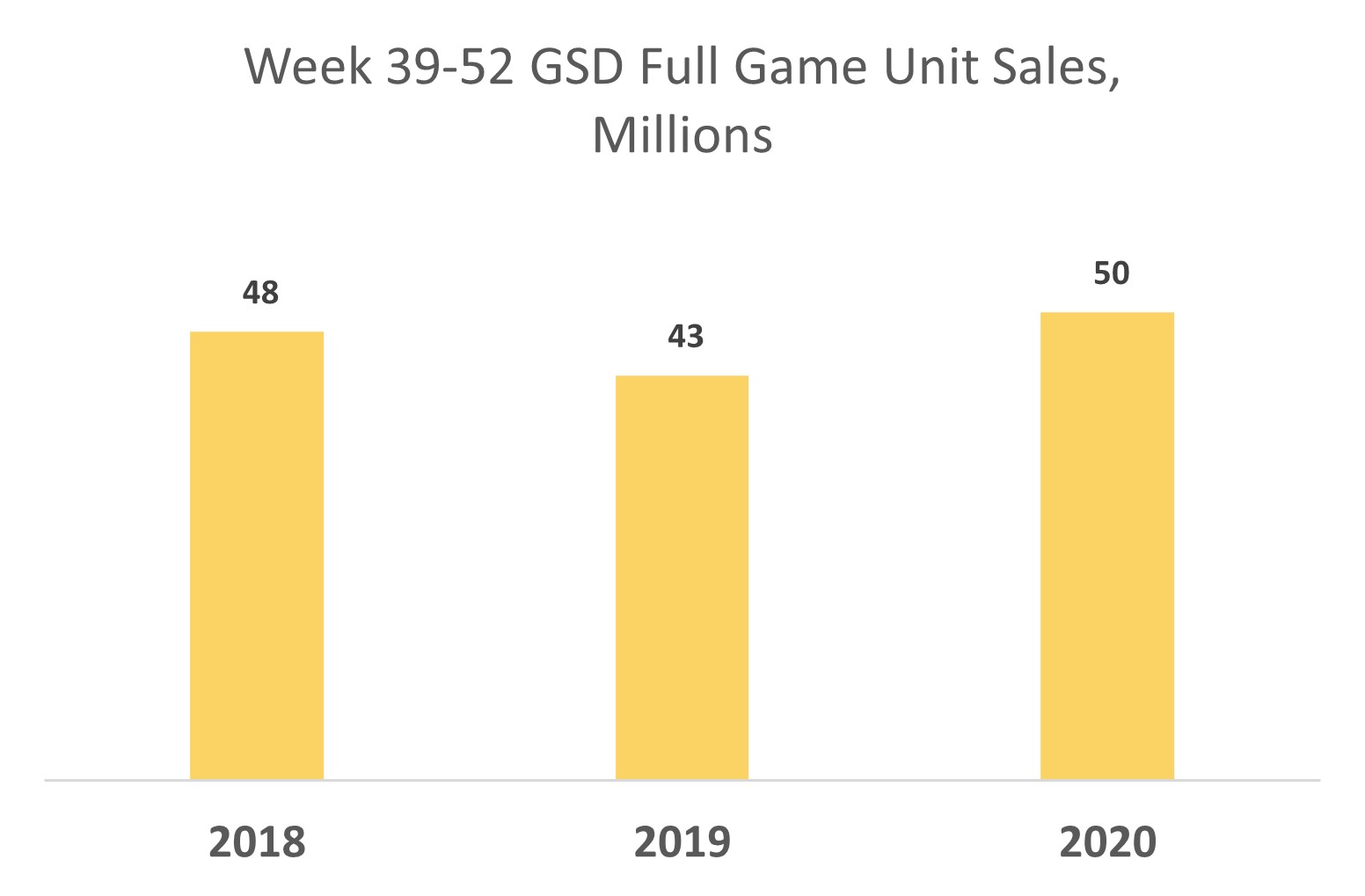 In chart 1, the Q4 period saw a decline in full game sales when it came to overall units sold for the year. It should be noted that 2020 is an outlier due to the spike in sales in March when most of Europe went into the first lockdown. The Q4 period in 2020 is being compared against a much larger share of units sold earlier in that year in contrast to 2019 and 2018. However, even with the higher than usual sales for the Q1-Q2 period of 2020, it should be noted that more than 2/5 of all sales in 2020 occurred in the Q4 period.

For physical retail sales only, the Q4 period has a greater impact. In chart 2 half of all unit sales in the year came from the Q4 period:

It is interesting to note there is a small 1 percentage point decline with each passing year between 2018 and 2020. Given that chart 2 is only looking at physical retail sales, it is not correct to assume the decline is attributed to the transition towards digitally downloaded sales. To get a better understanding of why there is a marginal decline, one option would be to see how many units in total were sold during the Q4 period; 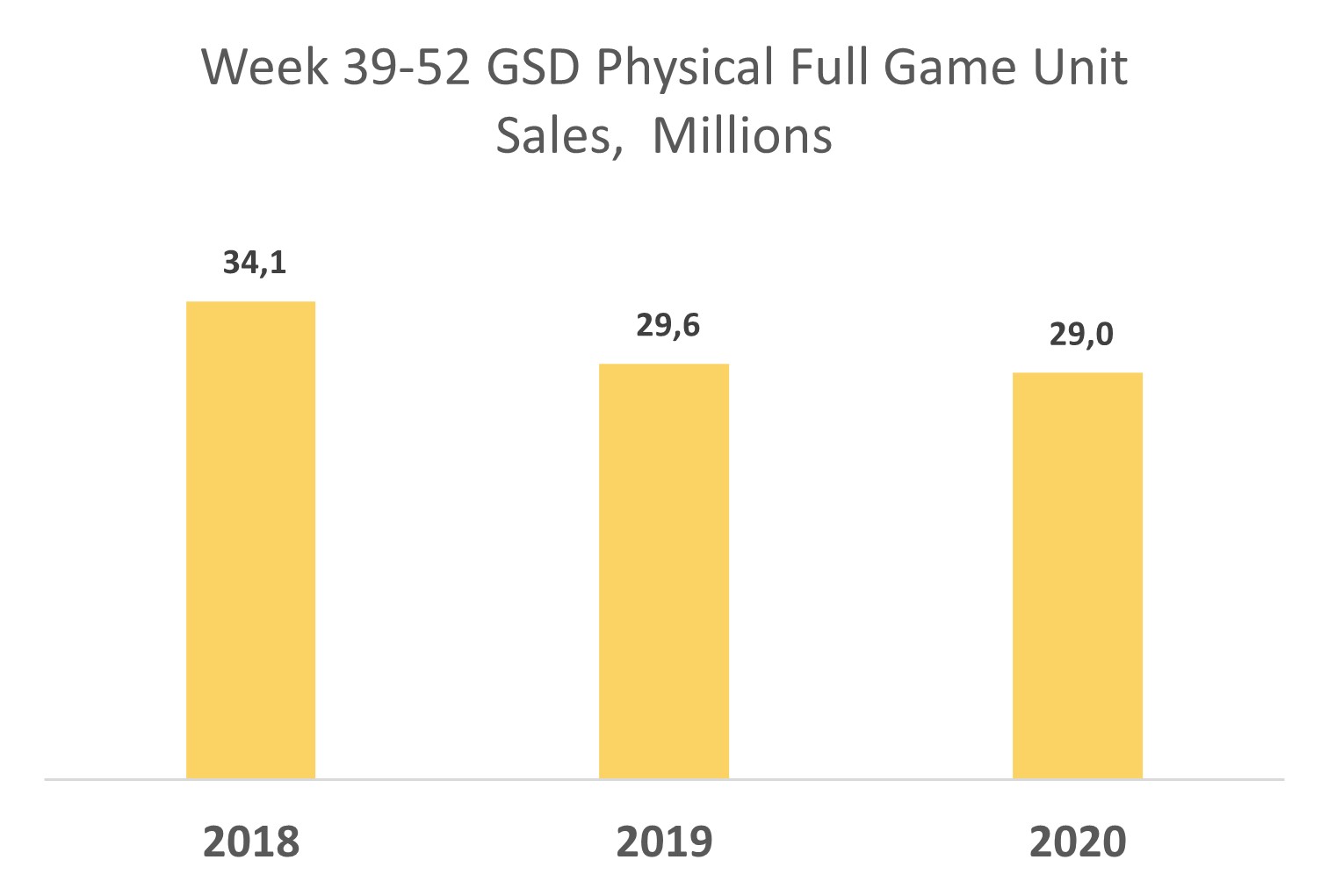 In Chart 3, between 2018 and 2020 the annual cumulative growth rate (CAGR) came to -8%. This implies that not only are physical sales as a percentage of annual sales are declining, but physical unit sales during the Q4 period are also on the wane. It will be fascinating to see if unit sales in 2021 reverse this trend. A lot of it will depend on the unit sales for titles available for the PS5 and Xbox Series consoles and if these offset the expected declines in unit sales for the PS4 and Xbox One. To a lesser extent, it will also depend on the demand for Switch catalogue titles and whether the demand in Q4 2021 can be as healthy as they were back in Q4 2020.

On the flip slide, let us look at the impact the Q4 period has on network sales (digital downloads).

In Chart 4, the Q4 period has less impact on annual sales than those for physical retail (Chart 2). There are several reasons why.

Firstly, consumers will be inclined to gift physical games rather than digital codes that come on cards or receipts.

Secondly, throughout the year, price promotions for digital content occur more frequently than in the physical retail market resulting in a greater number of network units being sold outside the Q4 period.

As a result of this increase in demand for network formatted games during the Q4 2020 period, the full game category in total (that includes physical retail and network digital downloads), increased by +24% in unit sales compared to Q4 2019.

Given the slate of new titles coming out in the next several weeks with big hitters such as FIFA 22 (following the Euro Championship), Call of Duty: Vanguard, Far Cry 6, Battlefield 2042 and Halo Infinite, sales could either match 2020 numbers or even exceed them.

With no major title coming out for the Switch in Q4 2021, the field becomes open for the PS5 and the Xbox consoles to gain market share. The bigger question is whether subscription services such as PlayStation Now and Xbox GamePass will cannibalize full game sales. A lot will ride on the scale of gifting this year.

Q4 2021 is also a weather bell on two fronts. Will consumers stick with retail physical games or migrate to the network format (digital downloads)? Will the uptake in unit sales for full games from the new consoles offset declines expected from the older generations?