Stock markets are volatile. At best they reflect the health of a company and the overall direction of the economy, at worst they are hostages to human emotions and anxieties. There is no denying that a lot of decisions corporations make are to protect or boost their share price. Video game publishers which have gone public are no exception. Although it can be argued these companies produce “art”, they are fundamentally a business working in the entertainment sector and for many their goal is to maximise profit to ensure longevity. The purpose of this snapshot analysis is to gauge how resilient investors see video game companies given the turbulence of the pandemic, higher costs of living, and now a major war in Europe.

The Russian war on Ukraine, the global supply chain crises, and the threat of double-digit inflation have created stresses on Western financial markets. This has all led to many investors seeking firmer ground in commodities and property, away from equity. In the past week, technology stock markets, especially crypto markets, have taken a battering. It is useful to benchmark video game stocks against other high-growth technology stocks to ascertain the best risk-reward opportunities. This article does not serve as advice on what stocks to buy or sell but merely as an exercise of comparing how well publicly traded stocks in the game industry has fared against stock market indexes and cryptocurrencies. Investors will always have their own reasons why to buy or sell equity, some investors look to short stock to make money while others believe in the company and want to have a stake in its future. The intention of this article is an assessment of video game stock against other market trends.

Below is a one-year and six-month snapshot of the global equity markets, Bitcoin and Ethereum, and the share price of the publicly owned AAA publishers. The analysis is based on looking at the index price or share price from 1 June 2021 to 27 May 2022 and from 30 November 2021 to 27 May 2022. There are many reasons why the stock markets have experienced volatility these past months and this was covered by Damian Abrahams analysis on the investment website, Seeking Alpha, called “Prepare For Modest Video Game Stock Returns This Year”. Here we want to dig into why some of the video game stock prices have increased or decreased in relative terms to the overall markets.

The reasons for increase or decrease

Interestingly the share price for video game companies which tracked higher, when looking at the 12-month perspective, are all Japanese, except for Microsoft. Sega Sammy Holdings, Bandai Namco, Microsoft, Square Enix and Capcom all tracked higher on the year-by-year basis. By contrast, the UK FTSE 100, supported by high commodity prices and UK stocks pricing revenues in relatively strong USD, and the French CAC 40 were the only two tracked stock markets (from seven analysed) to perform better. The Japanese publishers all outperformed the Japanese stock market, the Nikkei 225, which decreased by -5%. 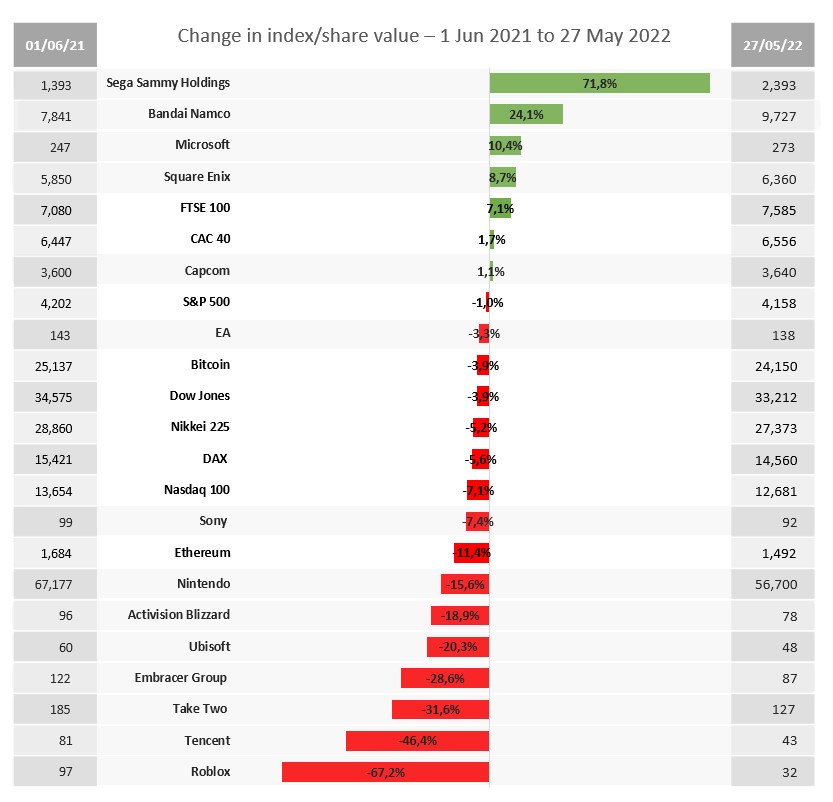 Among the top leaders Sega Sammy Holdings almost doubled their share price. In their fiscal 2022 results the company reported a revenue increase of +16% (with a forward projection of a further +17% in revenue in this fiscal year) and operating income increased 4x thanks to recoveries in Pachislot & Pachinko revenues as well as increased revenue from licences. The company is also riding on the success of the Sonic movies which are the bestselling box office films based on a video game property. The company also invested ¥20B in a share buyback which could account for some of the increase.

Similar to Sega Sammy Holdings, Bandai Namco also showed a strong performance in the last year. Net sales in their 2022 fiscal were +20% higher than the previous year and operating profit was up +48%. Strong catalogue performance and the success of the Elden Ring boosted sales with a projection that this year’s fiscal sales will marginally out-perform last year. At the time of writing according to European tracked data from Games Sales Data (GSD) the Elden Ring is the best-selling game in units for 2022,

Xbox game spending accounts for approximately 10% of total Microsoft revenue, so it is not possible to ascertain how much of its share trading is done based on its games business, but the news from Redmond is upbeat. In their latest financial disclosure (fiscal Q3 2022) Xbox content and services revenue grew by +4% and hardware revenue grew by +14%. Although Microsoft did not release any new GamePass subscription numbers the latest publicly announced 25 million subscribers is showing an upward trajectory in subscriptions for the service.

Both Square Enix and Capcom have seen multiple years of consecutive growth in both net and operating income. In their 2022 fiscals the operating income for both companies increased by +25% year-on-year. While Square Enix acknowledged some of this growth was due to employing new accounting procedures, both companies emphasised strong catalogue sales and brand identity as the key to their success. Square Enix recently sold off its Western Studios and some major IP including Tomb Raider to Embracer Group, with the emphasis that they wish to restrategise to blockchain investments. Capcom has a 2023 fiscal forecast of +7% increase in net sales. These factors, among others, most likely contributed to their increase in share price.

Generally speaking, the share price for these companies somewhat reflect the upward trajectory of their fiscal results. It should be noted that when looking at the six months share price snapshot, all these Japanese publishers that posted year-on-year share price growth have also seen increases at the mid-year level. Only Microsoft saw a loss.

When analysing share price over a shorter time there is a greater volatility as other factors come into play such as quarterly financial results, performance of newly released games, announcements (or lack of) future games and statements made by CEOs. The good news is that 8 out of the 14 tracked companies posted a share price increase between 30 November 2021 and 27 May 2022. 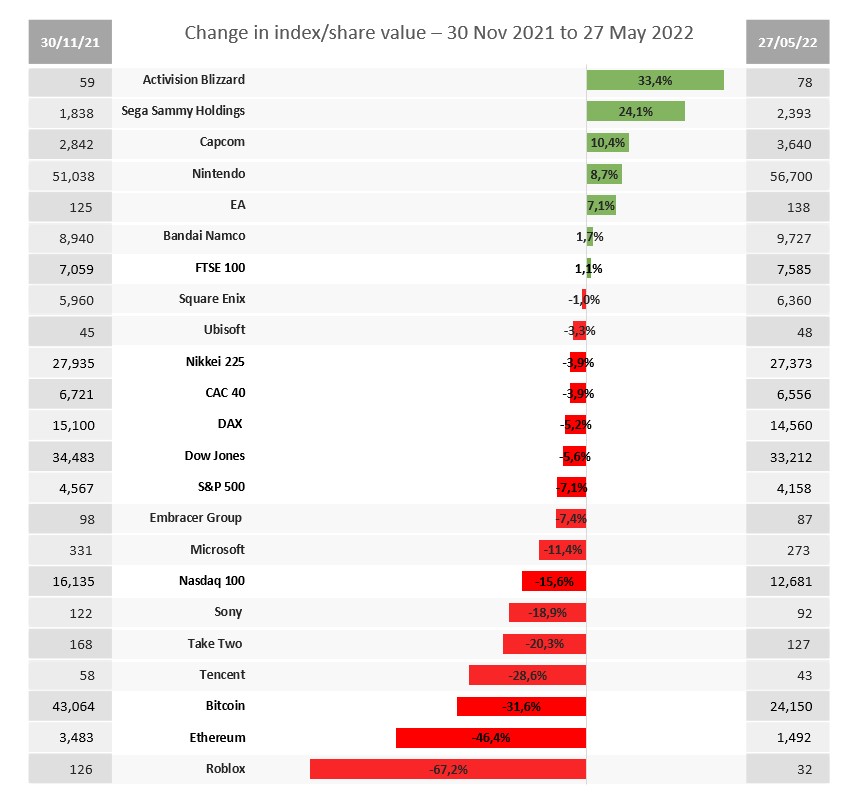 Activision Blizzard share price increased by a third as the planned acquisition by Microsoft received Activision shareholder and board of directors’ approval. The decision is now in the hands of the US Federal Trade Commission.

Rumours of possible future acquisitions of EA and Ubisoft have also generated investor interest. Ubisoft’s share increased by 5% (higher if you measure the change on a shorter period) and EA share price increased by 10%. As a testament to the strong brand identity of EA Sports, the recent announcement that EA and FIFA will be parting company did not result with a negative trend in EA’s share price.

When it comes to analysing game companies to the overall market trends between those two six-month dates, Bandai Namco, EA, Nintendo, Capcom, Sammy Sega Holdings and Activision have all outperformed the FTSE 100 which was the only tracked stock market (on this analysis) to post growth during the last six-month tent pole dates. These companies bucked the trend in index market trades which saw a downturn in the Nasdaq 100, S&P 500, DAX, CAC 40 and Nikkei 225.

Unfortunately, not all video game companies have seen fortune in their share price between the November 2021 and May 2022 tentpole dates. The share price for the Roblox Corporation is down -75% from $97 to $32 implying investors are worried by the latest booking numbers. In their latest financials, Q1 2022, Roblox Corporation posted a -3% decline in bookings compared to the same period last year. A decline in bookings is worrisome for investors as it could signify a downward turn in revenue for the future.

Although other companies also saw a downturn in share price such as Tencent (video game revenue represents just under a third of total Tencent income), Take Two, Sony (video game revenue also represents just under a third of total Sony income) and the Embracer Group, the industry, in total, is doing better than other economic sectors during these unsettled times. For example, below is a table that sums the price of the shares of all the 14 video game companies in this analysis and tracks that against the sum of all seven index markets and against the sum of the value of the two cryptocurrencies (Bitcoin and Ethereum, arguably the two main cryptocurrencies that count). Although the video game companies came off worse compared to a year ago (-8.3%), they came off best when compared to the last six months (+11.1%) and they have outperformed the indexed trackers and the cryptocurrencies which both posted loss in value for both sets of periods.

There is no conclusion to be made here as these numbers will already be out of date by the time you read this, but the overall indication is that the industry is doing well, and currently investors have growing confidence in the future for many of these game companies.